A cyclic process consisting of three consecutive and repeated stages: 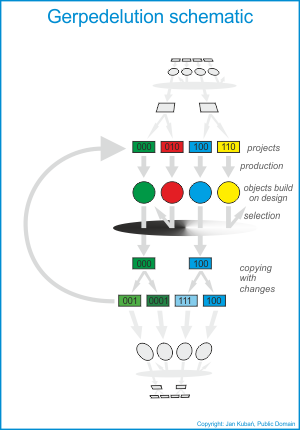 Gerpedelution is an abstract process introduced to better understand biological evolution. As a matter of fact:

Industrial production works according to the schematic of gerpedelution.

Biology works also on the basis of gerpedelution.

Biological evolution is the process, which in terrestrial conditions, brought into existence and continuously shapes the next generations of living objects. Biological evolution was a self-arousing natural phenomenon generated by the RPD, involving the construction of objects by grouping chemical molecules together, their disintegration and reconstruction, and other natural phenomenon involving the synthesis of proteins based on the information stored in DNA and RNA particles, which in addition are RPD-type particles. They are also carriers of information, upon which proteins are built from amino acids.

The name of this definiendum derives from:

II Principle of The Physics of Life

A chick selector "sorts chicks according to their appearance and separates the healthy from the deformed or diseased chicks." How? He looks for physical deformaties such as twisted fingers, blindness, distorted beaks, discoloured fluff, hard belly and more, as well as signs of such diseases as bronchitis or infection. Additional duties may include: "Placing sick chicks in an incineration plant, removing beak tips and tightly packing chicks into cardboard boxes". [source]